Raise your hand if you know what a castell is… okay, if that doesn’t sound familiar have a look at this:

Maybe this is starting to feel a little familiar. Perhaps you have seen this on television or on YouTube. Although,  no tenemos que en los Estados Unidos (we don’t have that in the United States).

This is a Catalan tradition rooted in the 1600’s.  Our group had an opportunity to visit the Colla de Castellers de Barcelona (seen in action in the above video) and learn about this tradition from our Spanish culture faculty Pep Ingles. A castell is to build a human tower.  In the 1600’s it was a tradition that after the procession that occurred from the church to the plaza during Muixeranga (a religions festival during harvest, the people of the procession would come together and build this tower.  As Pep said, people soon found making the towers more enjoyable than participating in the procession – so people would wait in the town plaza just to build the towers.  Many of these gatherings were typical in farm towns where building these towers became a form of entertainment and something to do that would bring people together.   All over Catalonia, collas (teams) of castellers started to form.  Now, collas will come together in cities all over Catalonia to compete against each other to see who can build the tallest tower.

Pep taught our group the different layers of the tower, names of the positions within the tower, and how a Colla is organized (the different types of ‘coaches’, how families get involved to provide support, and who typically participates.

The towers can take up to 2-3hours to build.  The pinya (base) can take around 20-30minutes to build and sometimes the Cap de Pinya (the coach for the base) may decide it won’t work and the colla (team) will have to start all over again.   Once the pinya(s) have been build the tronc can start to be built.  The tronc has 3 layers.  Next comes the pom de dalt, and at the tippy-top is the enxaneta – when at the top gives a wave at the top with 4 fingers to represent the 4 stripes of the Catalan flag.

After learning the structure, the terminology, and the major decision makers for building castells we got the opportunity to see castellers in action.

It was absolutely stunning – the room was completely silent except for the Cap de Colla shouting to the colla when to move and who could move and where to move.  All the hands from the people below, unwavering held up to support the pinya.   As I stood there in awe, my eyes started to move away from looking at the tower as a whole and I began to focus on the individuals.  The intense concentration and effort towards holding their individual position so that the tower as a whole could succeed. Starting with bottom – they have been there the longest, holding the most weight.  As I look up at each layer, each person showing their focus. 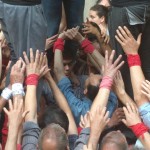 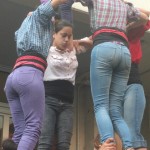 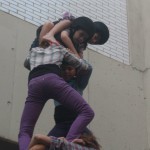 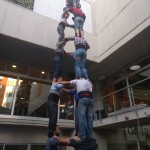 I have never seen anything like this.  Understanding the tradition of bringing neighbors together, the symbolism of the whole succeeding due to its many parts, and the intense honor and commitment castellers have towards their collas – all of this has brought me one step closer to knowing my summer home of Barcelona more deeply.